At exactly 8:50 this morning, I left my Intro to Programming class early and headed over to Intro to Robotics. Half an hour later, we were greeted by a man in a suit. His name was Daniel, he asked how we were doing, and he was the driver of the charter bus that we were about to take to the Google Science Fair kickoff event in downtown San Jose. My school is nowhere near rich enough to afford a private charter bus for a group of twenty kids driving fifteen minutes away, so Google offered to get one for us. That was the first gift.

At half past nine, we arrived at the Forager Tasting Room & Eatery, where the science fair was being held. It looked like a cross between a modern rustic restaurant (is that a thing?) and the Tech Museum. There were strings of light bulbs threaded across the ceiling, posters plastered across a brick wall, and people dressed in white "?!" shirts. We checked in and received shirts of our own. We also got red, blue, and green name tags labeled "Student". 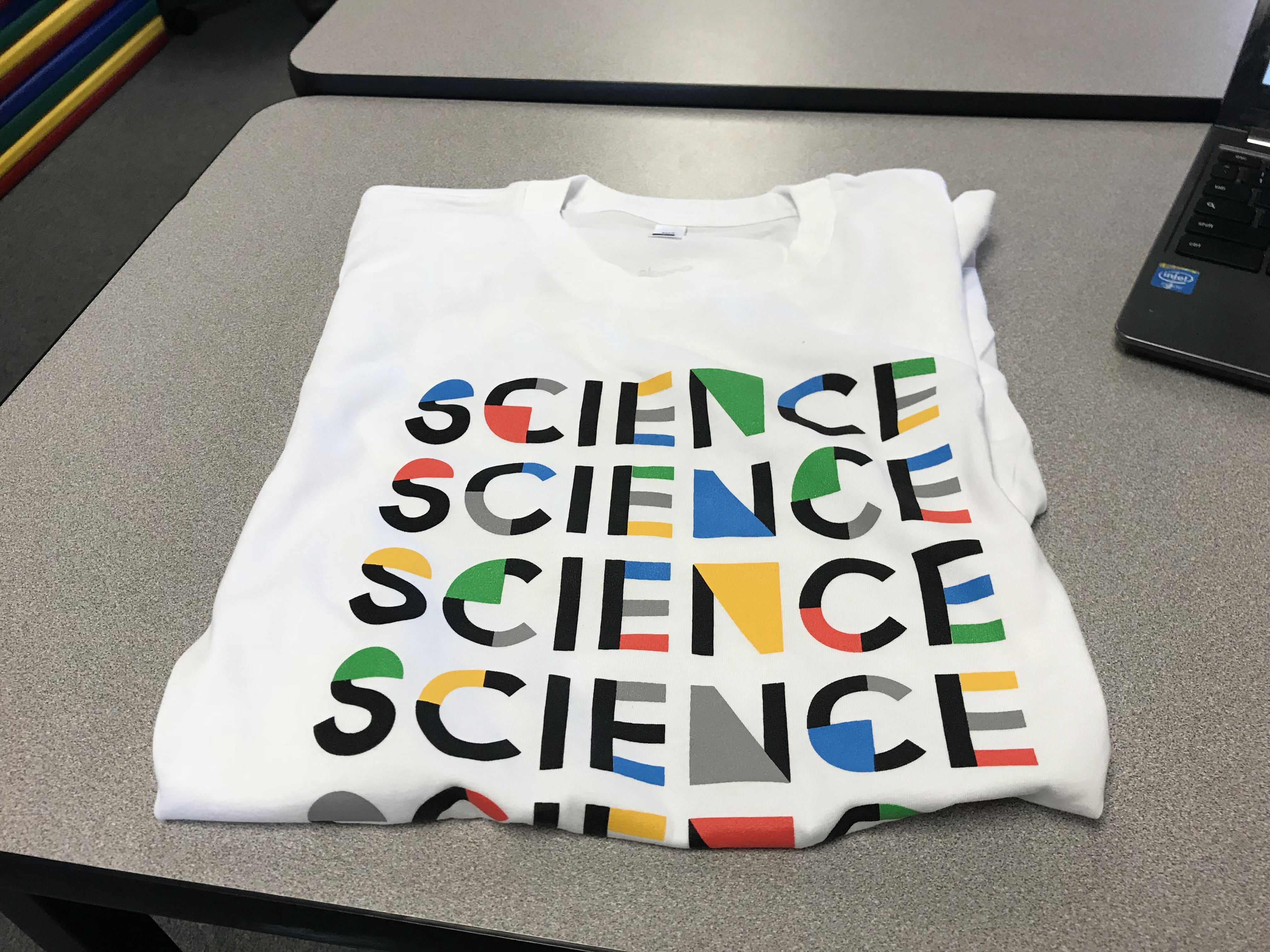 "Let's see, you're name tag is red, so you'll be over...there!" The unnamed man holding a sign that read "Ask Me" directed me to my assigned station. Tables and chairs surrounded a supply station with a poster that read "Mission 1: Stay Cool". According to the sheet of paper at my table, I was supposed to use recyclable materials to create an insulator. The goal of the "mission" was to store an ice cube inside and keep it from melting for as long as possible.

But before we could get our hands dirty, we heard from a few guest speakers. One was a San Jose city council member, Raul Peralez. Another was a 2013 winner of the Google Science fair, Ann Makosinski. Ann spoke a lot about her winning project: a flashlight that was powered without batteries. I'm still not so clear on how it works, but she mentioned using convection and the heat of the user's palm to power the flashlight.

Soon after, we started on our "missions". At the supply stations were literal buckets full of sand, cotton, and anything else that we might need to build our insulators. My team, which consisted of me and two of my classmates, started by grabbing a roll of aluminum foil, four handfuls of cotton, five balloons, scissors, a few sheets of tissue paper, and a timer. We molded some foil into the shape of a bowl. We filled the walls of this foil bowl with cotton, and lined the inside with tissue paper. To add a pop of color and because we wanted to get creative, we cut up two balloons and duct taped them over the paper. This was later referred to as the "nest".

At the suggestion of another "?!" clad adult, we filled the remaining balloons with sand. I partially inflated them with air before tying them shut. We molded more foil into a bigger bowl, and placed the sand balloons at the bottom. I filled the gaps in the floor with cotton, then used crushed-up tissue paper in the walls. The "nest" went in the middle. I cut a long sheet of foil and placed a circle cotton on top. I wanted to make this the lid to our insulator, but it was too small. I surrounded it with more crushed tissue paper and another layer of foil. After securing the lid and the "nest" to the bigger bowl with duct tape, we placed an ice cube inside. I started the timer. Our insulator, with the lid open and the ice cube inside.

After half an hour of checking on the ice cube, the mission came to an end. We heard from other teams who built caves of sand and foil or volcano-like structures to shelter their ice cube. Some teams were already left with a puddle of water, but our ice cube still looked fresh from the cooler. A few yards away, teams from Missions 2 and 3 described their projects, too. Mission 2 had to do with filtering water with soil, and Mission 3 was related to wind energy and makeshift turbines.

Then, it was time for lunch. We lined up and chose what we wanted. I picked up, in order, the following: A Forager strawberry banana probiotic smoothie, a container labeled "Hearty Ham", a pack of stylish utensils, and a cookie shaped like a beaker full of a blue liquid. The container also held a small portion of the best macaroni salad I've ever eaten. Each seat in the dining area was placed in front of a Google Science Fair tote bag. Inside was a notebook, a pack of pins, a sheet of stickers, and a popsocket. Google really knows how to tailor to their audience. The goodies inside of the tote bag.


Half an hour and two stolen cookies later, we had a bit of free time. Some middle schoolers blew up spare balloons, and other students posed for pictures in front of the wall of posters. My friends and I spent our time in front of a bright screen in the center of the room. Cameras underneath the screen tracked our movement and produced mirror images of us in real time -- but as masses of Google's signature shapes. 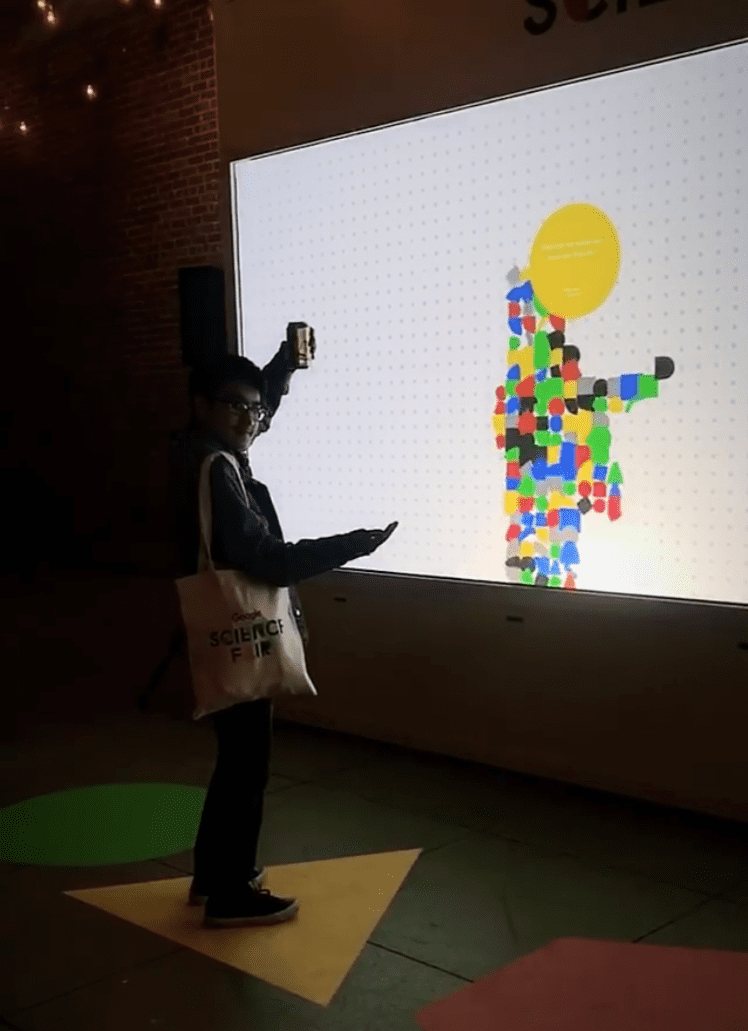 A friend of mine in front of the screen.

I checked on my ice cube. I found that our timer was taken (the "?!" shirt adults were probably cleaning up), but it was 12:09PM. About an hour and fifteen minutes after we'd placed the ice cube inside. I think it was slightly smaller, but I didn't see any water. It was still going strong when I left. I didn't get to see how long it lasted, but we know it was at least two hours. I was approached later by a lady who was amazed by how well our insulator was doing. I watched her point it out to her colleagues a few minutes later.

After taking some photos with my friends and classmates, it was time to leave. While the teachers were picking up posters and taking attendance, I grabbed a drink on the way out. This time, it was Forager's mango and chia seed probiotic smoothie. We said our goodbyes and boarded the charter bus. Something felt off. I had a stomachache. I shrugged it off and chatted with my teacher about her time at the University of Michigan.

Soon, we arrived back at school and returned to our classroom. While I was writing a thank you letter to the people at Google, I couldn't shake the odd feeling in my stomach. My sister is lactose intolerant, so I thought that I might be, too. I was inspecting the bottle of mango and chia seed smoothie when I saw it: "EX: 9/8/18". Oh.

Aside from my expired smoothie, the kickoff event was great. Maybe I should enter the actual competition. We'll see.

Yes, I "Play" the Guitar